Line charts are a staple of data visualization. They’ve existed at least since William Playfair and possibly earlier. Like many charts, they can be very powerful and also have their limitations. One limitation is the number of lines that can be displayed. One line works well: you can see trend, volatility, highs, lows, reversals. Two lines provides opportunity for comparison. 5 lines might be getting crowded. 10 lines and you’re starting to run out of colors. But what if the task is to compare across a peer group of 30 or 40 items? Lines get jumbled, there aren’t enough discrete colors, legends can’t clearly distinguish between them. Consider this example looking at unemployment across 37 countries from the OECD: which country had the lowest unemployment in 2010?

Tooltips are an obvious way to solve this, but tooltips have problems – they are much slower than just shifing visual attention. And tooltips don’t work on hardcopy, nor in PowerPoint, nor do they work during a presentation unless you’re the person holding the mouse.

The Limits of Small Multiples

There are other visual ways to solve this, for example, sparklines, small multiples (i.e. separating each line into its own chart), horizon charts and so on. Each of these techniques creates a lot of separate charts. For example, with small multiples, you can see trend, but it’s very difficult to compare magnitude when all the charts are at different scales. Here is a subset of 16 of the 37 countries – is Denmark higher or lower than Estonia at the end?

Of course, the small multiples could be made at a common scale, so that magnitudes can be compared. Here’s the same subset, all sharing the same vertical scale:

Now, it is easier to tell that Estonia is higher than Denmark at the end. But all of Austria’s performance is squished into a few vertical pixels, making it difficult to get a sense of any of the detail of Austria’s trend. And it’s still very difficult to answer a question such as which country has the lowest unemployment in 2010. In order to do this comparison, you have to make a note of a particular point on each chart and rely on short term memory to keep track of all the different values. The benefit of a direct visual inference possible when the lines were superimposed in a single chart has been lost.

I think of this as the superimposition/juxtaposition tradeoff. With superimposition, everything is overlaid in one space with high resolution enabling local comparisons between entities – but points can be occluded, lines tangled, and difficult to identify individual elements. Juxtaposition pulls everything apart into little separate little charts – but you sacrifice a huge amount of resolution as each data subset is forced into 1/(number of items), and you have to rely much more on short term visual memory. A lot of popular visualization approaches today go for juxtaposition, e.g. dashboards.

Following the theme of this blog, consider how text can be integrated more directly with the chart. There are many possibilities:

You could remove the legend and place labels directly associated with each line, and use some collision detection make sure labels are spaced apart. This is useful if you want to compare two lines at the end – e.g. does Spain or Greece have higher unemployment in 2014?. But it is less useful the further away from the end that you move into the chart, especially if there are a lot of crossovers making it difficult to visually trace the lines – e.g. how were Spain and Greece doing back in 2006? 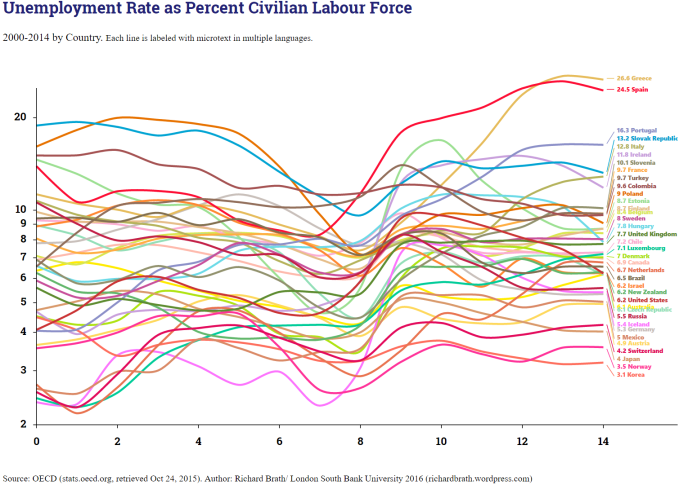 Why do the labels need to be outside the chart? Instead, consider moving the label directly into the chart. Labels can be directly associated with the path of a line, just like river labels on a map. A little bit of collision detection can be used again to reduce label overlap. Yes, Greece had slightly higher unemployment than Spain back in 2006.

Consider the line again. Why do we need both lines and labels? The entire line can be replaced with a continuous string of small-sized labels. You lose a little bit of accuracy, but each line is identifiable and can be re-found after passing through a congested area. E.g. What happened to Estonia’s unemployment rate before, during and after the crisis of 07-08?

In effect the line has become a multifunctioning graphical element:  it works as both a line and as a label. There’s quite a few things going on here, so let’s address them:

There are also some interesting questions about distinguishing lines in congested areas. With maps, typically there aren’t alot of overlapping things at one location, so maps don’t have to deal with 20 different items all overlapping at once (e.g. typographic maps). As discussed earlier, one problem with superimposed lines is areas of congestion and losing track of lines. The variation in colors and font characteristics help. On maps halos (white outlines around text) are commonly used in some software. I tried halos (left) and no-halo (right):

The left image, with halos, is more clear for the words on top, e.g. Brazil, but words at the lowest level are completely obscured. However, in the right image, words at lower levels are still partially visible: the colors and forms can be seen through the gaps between letters at the higher level. Try to follow Finland in the left image and the right image.

Once a decision has been made to use text along a line, there are more opportunities. The text doesn’t necessarily need to be a short label repeated over and over. Phrases, sentences or multiple languages can be used. Here’s the same chart with the microtext in Japanese, Greek, French, Russian, German, Arabic and English (click for bigger version):

Once we start bringing text into the core of the chart, it opens up a lot of new possibilities. What do tweets, news headlines, poetry, table of contents and web pages look like when they become integrated within charts?