Posted on October 6, 2014 by richardbrath

Font differentiation is rarely used in information visualization for differentiating among categories of information. However it has been used in this way in typography, notation systems and cartography.

One very early example is from Chambers’ Cyclopaedia published in 1728. Chambers uses all caps for the root of the tree, italics for titles of major branches, small caps for specific fields, superscript for chapter numbers and roman text for the other prose.

Cyclopaedia 1728. Roman, italics, uppercase, small caps and superscript are used to differentiate categories of information in this typographic hierarchy of knowledge.

Historically, mixing font families may be used to indicate different types of data, such as this chart from Haeckel’s Pedigree of Mammals showing a taxonomy with branches with alternative classification naming systems differentiated by roman, italics, slab-serif and blackletter.

Haeckel might be following an established pattern of using different fonts for multilingual labels. For example, see the multilingual captions on this illustration from Henry Overton’s 1733 book, ‘The Cryes of the City of London Drawne After Life’ 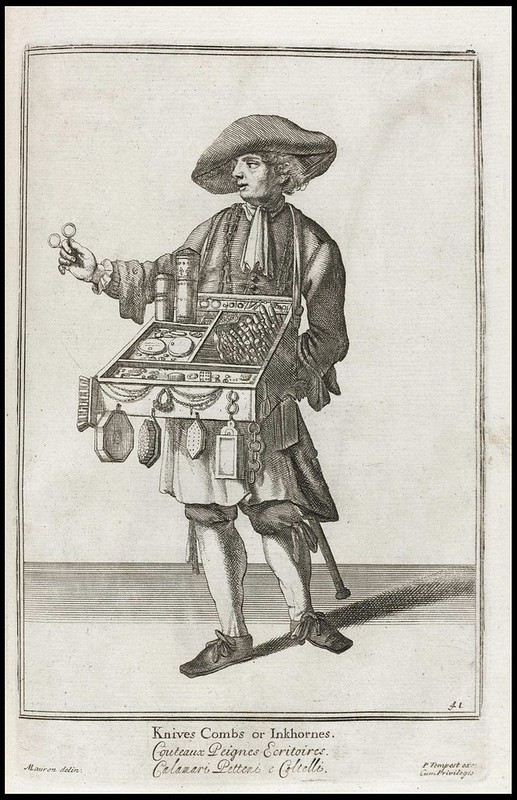 This same approach can be used for different speakers in a text, for example, in the graphic novel, Asterios Polyp by David Mazzucchelli, each character speaks with a unique font family, the rigid title character in a straight-line font always in authoritative uppercase, his artistic spouse in a softer rounded font always in mixed case, and various other characters in other fonts, such as the vet in a serif font.

Each character in the graphic novel Asterios Polyp speaks with a unique font.

From a labeling perspective, while maps typically use italics – roman; serif – sans-serif; to create visually diffentiated categories of labels, other font families may also be used. For example, some Ordance Survey maps use blackletter to label historic sites. Or, in pre-GPS days, my father used to mark-up his paper maps with his own unique hand writing when planning family road trips.

While much discussion and many fonts installed on a system may simply be classified as sans serif or serif with many subtle differences, there are much larger diffferences – I.e. more easily visually perceived differences – if one is willing to consider a wider range of type. While some fonts are rather ornate, there are clean, readable font families available in styles such as blackletter, handletter, script, slab-serif, etc.